An IBC table creates new marks for fire rated glazing assemblies. The purpose is to make sure that the right glazing and framing goes in the right place. The new marking replaces test standard numbers with letter identifications.

It’s about to get a lot easier to use the right glazing product in the right application, thanks to the 2012 IBC Table 716.3  Marking Fire Rated Glazing Assemblies. The new table provides architects, specifiers, installers, plan reviewers, and building officials with an easy reference that shows which performance standard(s) a product meets along with its duration rating. The new marks replace test standard numbers with letter identifications, which are then used in tables for Opening Fire Protection Assemblies, Ratings and Markings (new Table 716.5 revised Table 715.4) and Fire Window Assembly Fire Protection Ratings (Table 716.6).  The same marking system was included in the 2012 edition of NFPA 101 Life Safety Code.

The 2012 IBC tables are “a clarification of the 2006 and 2009 editions of the IBC,” explains Diana San Diego, director of marketing for SAFTI FIRST. “Even though the new tables will not be adopted locally until jurisdictions accept the 2012 IBC, they are useful today in understanding the 2006 and 2009 IBC glazing requirements.” 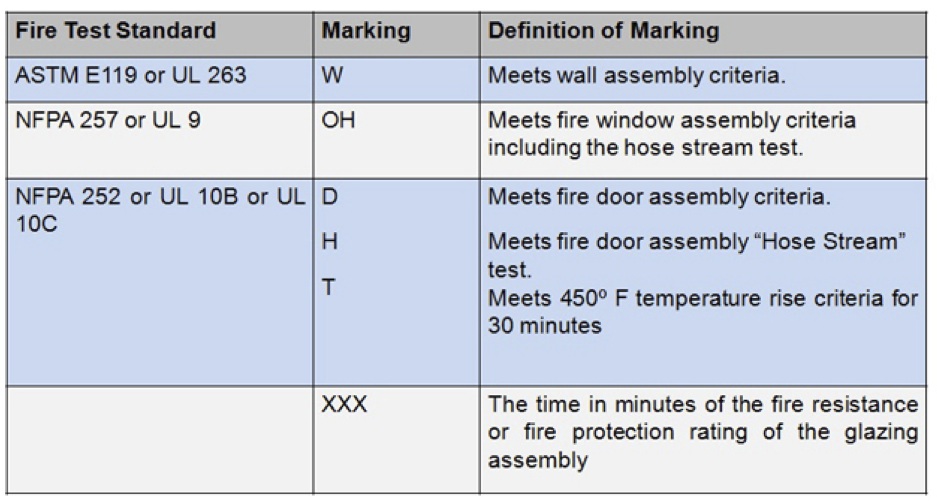 As before, a two or three digit number shows the fire rating duration in minutes.

Multiple letters for glazing that passes more than one test standard

Some products may have been tested to more than one standard, which means that this glazing will have multiple markings. For example, fire resistance glazing that passes both the wall fire test and fire door assembly test will carry multiple markings of: W, D-H-T. This product can be used in large vision panel sizes in 60 and 90 minute doors, where a fire protection rated product, such as safety wired glass and safety ceramic which are marked only D-H, would be limited to 100 square inches.

The new marks not only help code officials easily identify if the proper glazing is used in the proper application, but they also provide architects, specifiers and even contract glaziers with helpful keys to fire rated glazing applications specified in Tables 716.5 and 716.6 of the 2012 IBC. The tables have been revised in accordance with recommendations by the ICC ad hoc study committee to incorporate the new letter markings and to add information distinguishing fire protection and fire resistance glazing.

The new 2012 IBC fire window rating Table 716.6 has been similarly expanded to clarify where fire protection rated products are allowed and where they are not, and lays out where fire resistance rated glazing must be used (e.g., 2-hour interior walls).

SAFTIFIRST has modified its labels to comply with the new marking system in 2012 IBC Tables 716.3, 716.5 and 716.5. Below are some examples of different labels that accompany SAFTI’s glass products.

SuperLite I glazing can be used in 20-minute doors. The fire rated glazing bug carries the “D” mark (see mark on the left) to indicate that it meets the fire door test standard (NFPA 252). SuperLite I has the strength of tempered glass, easily meeting the CPSC Cat II safety requirement without having to be filmed or laminated.

SuperLite II-XL 45 is used in the 45-minute sidelites. This glazing product has an “OH” mark, meaning that it meets both the fire window test standard (NFPA 257) and the hose stream test. Like SuperLite I, SuperLite II-XL 45 has the strength of tempered glass and meets the CPSC Cat II safety requirement without having to be filmed or laminated.

In an exit enclosure/stairwell, architects can increase the vision area in a 60 minute temperature rise door by using SuperLite II-XL 60 in HMTR framing. Used together, the door assembly meets the “T” criteria, indicating that it meets the temperature rise limitation within the first 30 minutes of the test. The 450º F limit is the most common, although some applications may require the more stringent 250º F limit. Transparency can be also extended to the wall by using SuperLite II-XL 60 in GPX Framing. Both the glass and the framing meet the required “W” criteria, which indicates that it meets the wall assembly test standard (ASTM E119). Ceramics and wired glass, which are rated up to 180 and 90 minutes respectively, cannot be used in this application because they do not have the “W” marking.

PYRAN Platinum F. Fire rated ceramics are limited to 100 square inches in 60 and 90 minute temperature rise doors because they do not protect against radiant heat. Even though this glazing is rated up to 180 minutes, it lacks a “T” marking because it does not meet the temperature rise requirement for this application.  Instead, it has the “NT” mark indicating it is non-temperature rise.

While the 2012 IBC table changes go a long way toward clearing up confusion about where and when fire rated glazing can be used, there is still work to do. The ICC’s ad hoc study committee continues to meet. One area sure to warrant additional study are fire door assemblies.The 2012 IBC changed the code to remove an exception allowing fire protective vision panels in fire doors used in exit enclosures and passageways if the building was fully sprinklered. In the 2012 IBC, Section 716.5.5.1 makes it very clear that fire protective glazing cannot exceed 100 square inches whether or not there are sprinklers.

Another inconsistency that has yet to be addressed is the challenge faced by test agencies testing assemblies involving a 20-minute door and 45-minute sidelites and transoms, which the codes require in 1-hour exit corridors. Because the door will fail before the sidelites, test agencies cannot actually test the assembly that is required by the code and installed in the field. Instead, they test the assembly without the door.

“Overall, architects and code enforcers are very enthusiastic about the new marking system and tables,” said fire rated glazing code expert Kate Steel, who serves on the ICC ad hoc study group that helped fashion the new tables. “There’s been a lot of confusion about when and where to use fire protection versus fire resistance glazing, and about which products can protect people and property from radiant heat. The new tables are a big step forward in translating the codes.”