A high school student pushed open a hallway door glazed with wired glass. His arm not only broke the glass, but penetrated it, causing severe injuries.

A recent USGNN news alert has once again brought wired glass to the spotlight in a tragic way.

In the story, 18-year old high school student Sean Lloyd in Burlington, Ontario, pushed open a hallway door glazed with wired glass. His arm not only broke the glass, but penetrated it, causing severe injuries to the muscles, tendons and nerves in his right arm. Even after major surgery, he still has functional limitations in his arm and will most likely have permanent nerve damage. Lloyd’s family has now filed a $5 million (CAD) lawsuit against the Halton Catholic District School Board in Ontario for negligence regarding the risks of wired glass.

Unfortunately, wired glass injuries similar to Lloyd’s case happen more that we think, even here in the United States. In June 2013, Kent (WA) Unified School District paid a $2 million (USD) settlement and issued an apology to the student who was injured when he fell into unsafe wired glass.

Keeping students and the general public safe from traditional wired glass has been a cause for myself and my company, SAFTI FIRST, for many decades. In the early 1990s, we had filed a petition with the Consumer Product Safety Commission (CPSC) to remove the exemption that allowed wired glass to meet a lesser safety standard. This petition was prompted by two things: first, independent testing performed on traditional wired glass demonstrated that it fails with as little as 50 ft. lbs., a force easily created by a five year old pushing on the glass. Second, new and fire and safety rated glass products that outperformed traditional wired glass was now available (download our white paper for more information).

After years of further testing, gathering testimonies from various experts and wired glass victims and continued product development on our part, traditional wired glass lost its exemption from meeting safety glazing standards when used in educational and athletic facilities in the 2003 IBC. In the 2004 IBC Supplement and the 2006 IBC, traditional wired glass was no longer exempt when used in any hazardous location for all new construction and in all types of occupancies.

Now we are embarking to make the same change in Canada in order to keep school children and other building occupants safe from accidental impact with traditional wired glass. Currently, the only fire rated glazing product recognized in the Building Code of Canada is “wired safety glass,” but as we’ve seen here in the US and recently with Lloyd’s suit, traditional wired glass is not safe. We have submitted a safety glazing code proposal that is currently under review by both Standing Committees on Fire Protection and Housing and Small Buildings.

The proposal will upgrade their outdated safety standards to current requirements applied in the International Building Code (IBC). This includes deleting the existing table for maximum area of individual lites; suggesting new language that provide for permanent identification of safety glazing; deleting any language referring to the old standard and any references to “wired safety glass” and suggesting language that matches the human impact hazardous location requirements currently applied through the IBC. Our code change requests (CCRs) were reviewed by both Standing Committees on Fire Protection and Housing and Small Buildings. Each Standing Committee agreed to the need to update the codes and requested approval to add these issues on their respective work plan. The committees will be working on the code changes this year.

Enacting change at a national level demands tremendous time and resources, and that is something that we’ve experienced first-hand here in the US and now again in Canada. However, when the safety of children and the general public is at stake, eliminating the danger from traditional wired glass is something that we have always been passionate about, and fight that we will continue to carry on.

For more information on the dangers of wired glass, please view the CBS report on our website’s video page. 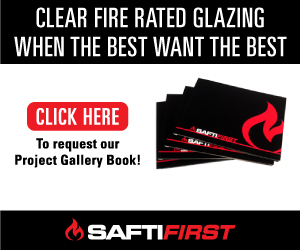